3 year old James is the youngest mayor in the world. Just last year, i.e. in 2015, he was elected as the mayor of his town of Dorset, Minnesota. Apparently, the mayor was selected in a specific process; they would pick out a name from the hat and make that person the mayor. James’ old brother, Robert has already become mayor twice.

When Steve Harvey heard about James, he couldn’t help but invite him to his famous show “Little Big Shots”. Till now, he has invited various talented kids on his show and all of the episodes have won millions of hearts. Yet, this might be the first time he has invited a mayor.

You’ll fall off your chair when you see their conversation. Watch this video below and let us know your thoughts about it via comments!

SHARE this video with all your friends and family.

Hope For Paws, a non-profit organization working to rescue and rehabilitate animals in need …

Dogs are really amazing companions. They are playful, cuddly and great help around the … 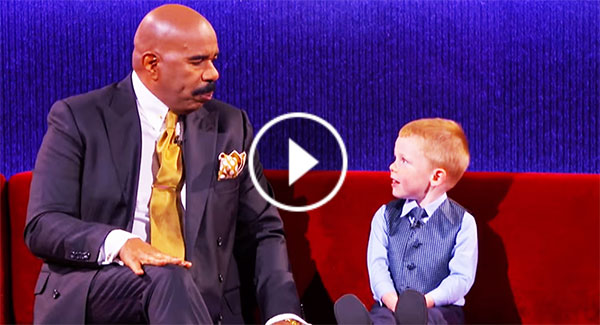